Victory Denied: Everything You Know about Iraq Is Wrong! Roger T. Aeschliman 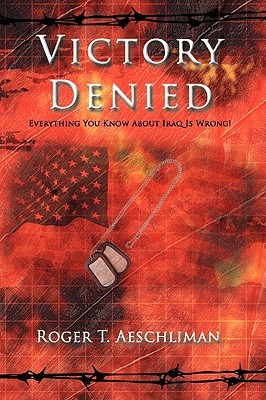 Victory Denied takes you all over Iraq as a part of the Joint Visitors Bureau official dignitary escort team, into meetings with US and Iraqi Generals, US and Iraqi governmental officials, Iraqi citizens, and the soldiers who are there getting the job done.

It is a remarkable memoir, written boots-on-the-ground by a deployed Kansas Army National Guardsman with a professional background in media, government and politics. These skills served him well as he navigated the halls of the US Embassy in Baghdad, crossed vast deserts to opulent palaces, and toured up the Tigris and Euphrates Rivers to the very borders of Iran and Syria, dodging diplomats and Congressional aides as well as bullets.

Even more it is the personal and moving story of an American soldier leaving home to do his duty when called. Aeschliman is erudite and thoughtful - a true renaissance man - writing as eloquently on the diverse subjects of history, botany, zoology, astronomy, sociology, philosophy and religion, as well as military affairs and current events. Additionally this book is a love story, a deeply touching account of a husband, father, son, and community leader in love with his wife, children, parents and his city, state and the United States of America.

Victory Denied will shock the public discourse overIraq and will change the face of our 2008 Presidential campaign.

Comments
Comments for "Victory Denied: Everything You Know about Iraq Is Wrong!":