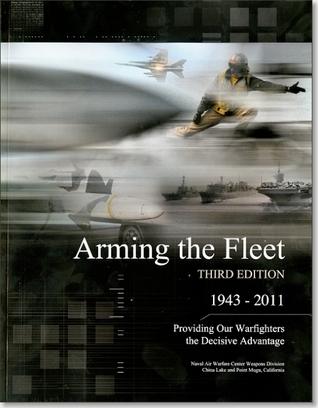 China Lake developed 75% of the air-launched weapons used during Vietnam and jointly developed 80% of those used during Iraqi Freedom and the Center continues to arm the fleet into the future. In addition, the Division has been awarded 1,600+ patents, and the book documents 50+ world “firsts” including nonnuclear work on the first atomic bomb, Sidewinder missile, plastic bonded explosives, biofuels, light sticks, air-bag sensors, stop action video as well as developing early technology that directly evolved into today’s GPS, digital computer searches, and MRI.Arming The Fleet (ATF) describes the Division’s role and quick response achievements in every major U.S.

crisis from WWII to Iraqi Freedom – from Iwo Jima and Midway to Fallujah and Baghdad. ATF documents the Division as a world leader in guided missiles, advanced weapons and systems, and complex software integration on tactical aircraft, energetic materials and subsystems.

In addition, the Division is conducting RDT&E (Research Development Test & Evaluation) on 25+ varied unmanned aerial systems (UAV) which is a top-four strategic thrust area.ATF tells the story about how many of today’s major weapons “in the news” got their start including Trident, Tomahawk, HARM, Standard Missile, and Sidewinder. Remarkably, most of the major technologies ever developed are still in fleet use today in one version or another.Arming The Fleet III includes 208 pages, 216 photos/graphics, and 1,000+ indexed items.

Anyone wanting to learn more about major milestones in U.S. Naval weaponry and technology “then and now” will find this book of great interest – not just “history” as this Third Edition is updated through 2011.The legacy continues...