The Real Price of War: How You Pay for the War on Terror Joshua Goldstein 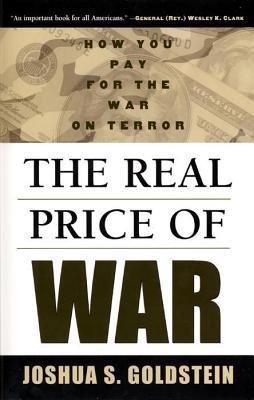 Goldstein argues that we need to face up to what the war costs the average American--both in taxes and in changes to our way of life. Goldstein contends that in order to protect the United States from future attacks, we must fight--and win--the War on Terror. Yet even as President Bush campaigns on promises of national security, his administration is cutting taxes and increasing deficit spending, resulting in too little money to eradicate terrorism and a crippling burden of national debt for future generations to pay.The Real Price of War breaks down billion-dollar government expenditures into the prices individual Americans are paying through their taxes.

Goldstein estimates that the average American household currently pays $500 each month to finance war. Beyond the dollars and cents that finance military operations and increased security within the U.S., the War on Terror also costs America in less tangible ways, including lost lives, reduced revenue from international travelers, and budget pressures on local governments.

The longer the war continues, the greater these costs. In order to win the war faster, Goldstein argues for an increase in war funding, at a cost of about $100 per household per month, to better fund military spending, homeland security, and foreign aid and diplomacy.Americans have been told that the War on Terror is a war without sacrifice. But as Goldstein emphatically states: These truths should be self-evident: The nation is at war.

The war is expensive. Someone has to pay for it.

Comments
Comments for "The Real Price of War: How You Pay for the War on Terror":